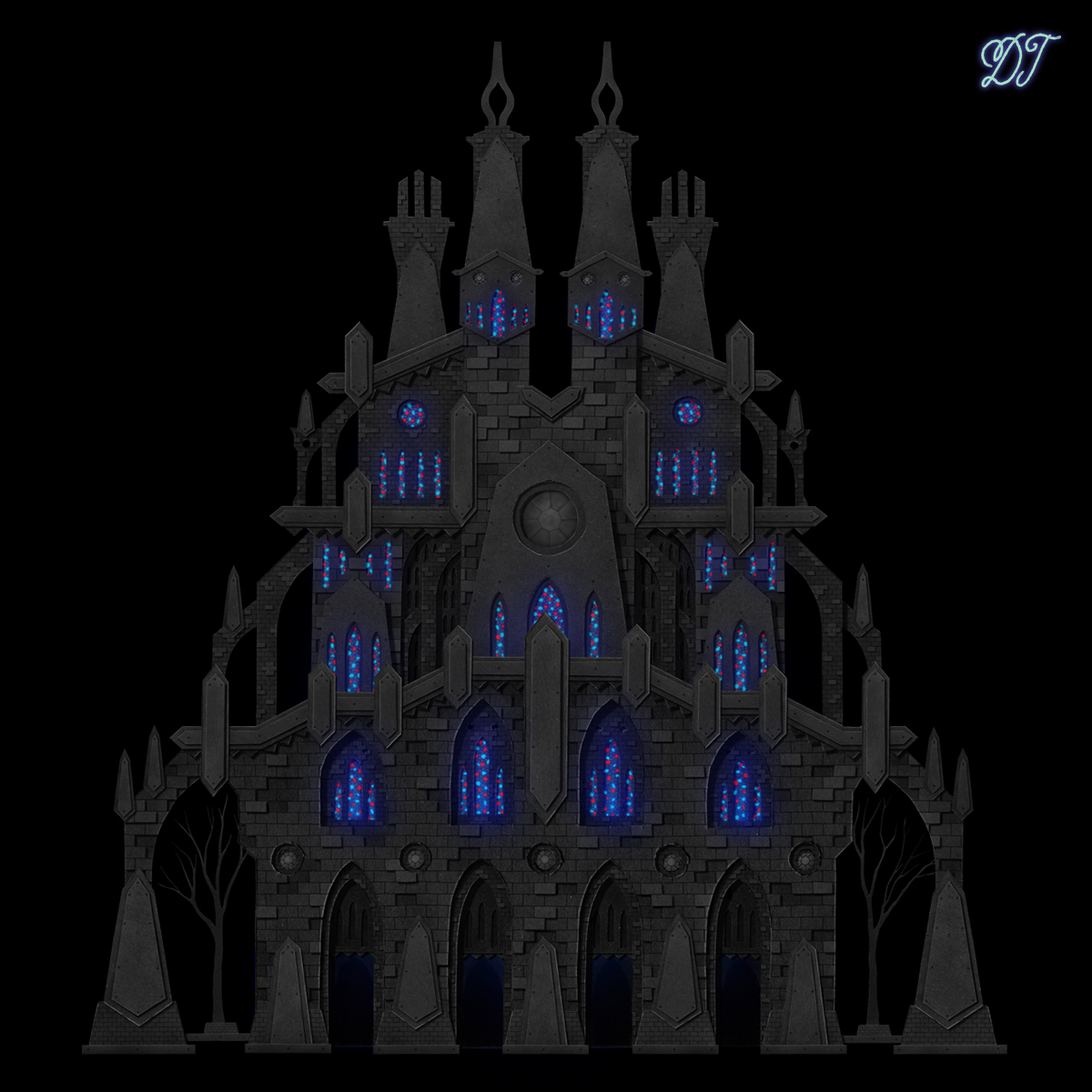 … the religion of the city

In the shadow of decrepit depo station rests in silence the enormous machine from D. W. Targezbung’s factory which is abandoned for a long time. Probably it could be some train due to the fact there are wide rails that come out of this depo. We can only guess what was the machine’s original purpose and if it ever had been in motion or what force could possibly power it. The only person who knew the purpose of this marvelous machine was the famous inventor D. W. Targezbung and maybe also his granddaughter. Neither of them lived that long to see the machine turned on. Nobody to this day knows where the Tagrezbung’s brick can be found. Like every citizen of this city also D. W. Tagrezbung honored all local traditions. Shortly after inventor’s death his admirers started to search for the mysterious brick, nevertheless without any success. Wonder they didn’t take the whole factory apart.

The city with such a strange past has a lot in its memory. The west side of the city is surrounded by the stone obstacle that is supported by a massive wall. The wall acts as a borderline which separates the world of humans from neighboring Transparent land. In the course of history, the wall gained such importance that its own construction became a cult. Architecture, engineering, sciences were the most powerful tools of original wall builders. They remembered that in various places of the human world people worship different gods and cults. However, in this city the buildings alone became all the belief and gods. Smaller inventions and machines reached the same status a bit later. They managed to create the hourglass which controls day and night. After that, it was necessary to assemble the fabled “Phoenix” who is capable measuring night by his own life cycle. Even if the night would last a thousand years.

The cathedral, towering in the middle of town is not the temple of the God, but the temple with own purpose – listening to the very essence of incoming man. Therefore nobody ever doubted about fact that building or construction of machines is the ultimate idea and meaning of life. No wonder that the cathedral was considered as the “Sanctuary of Buildings” in eyes of people with the same importance as Border wall or Tagrezbung’s factory. Besides private prayers, sanctuary hosted also songs so pure, that they echoed to the other world through cathedral’s chimneys. There are rumors that time from time chimneys are still singing by themselves.

The sanctuary is always built around the altar, which is also the foundation stone. A position of this stone has always been definitive and it could not be changed in the future. Once builders finished a new construction, its ground plan and function was unchangeable. However the city is constantly built up again and again from better material and the newly discovered alloys, but nothing else changes. For many citizens, this construction cycle is a vital part of their life. Perhaps they are escaping from thoughts of Transparent land, who knows… 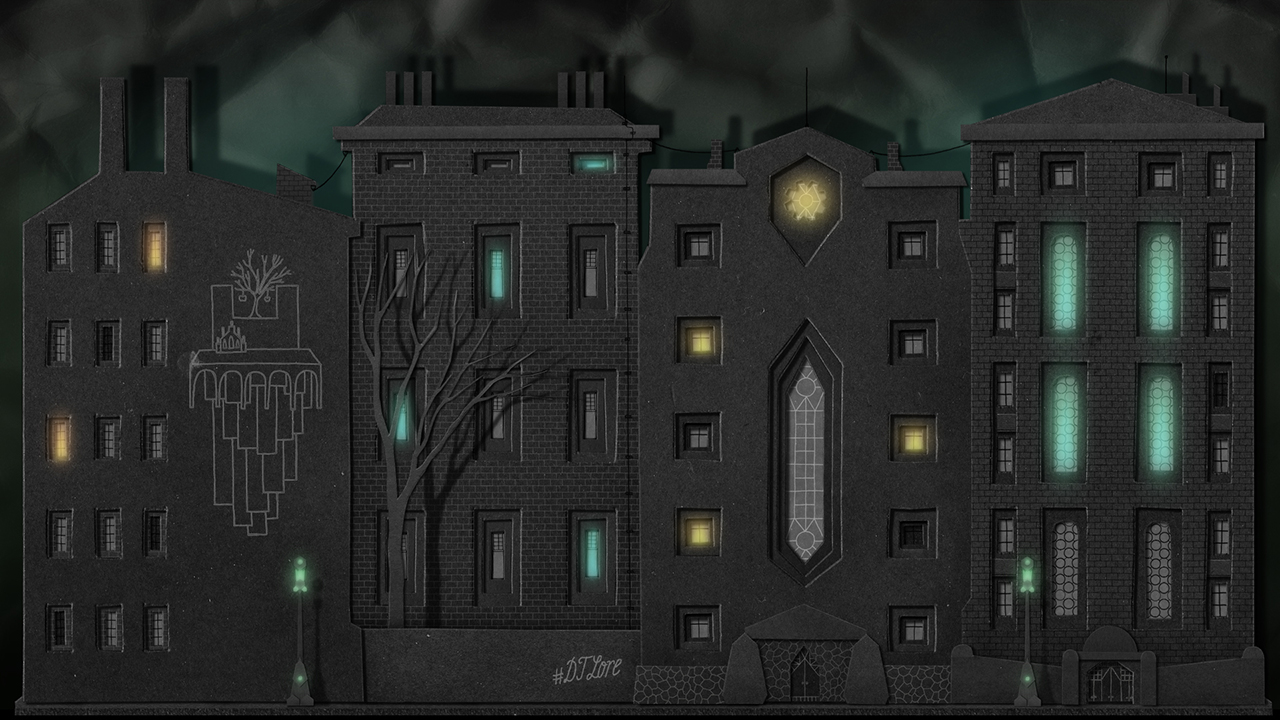 Belief in the buildings and their architects developed into distinct religions in this city. Its blueprints and ground plans became the most blessed sacraments. They can’t be damaged, redrawn or even sold. For this reason, blueprints are stored inside of the central cathedral and sorted out according to the family names and the purpose of the building. At first glance, the blur-adjusted plans may remind gravestones, but citizens have a different and very unique approach to the burial of the dead. The city has developed a strong affection for the cremation of deceased people and use of their ashes. Deep down underground a mineral so hard that even the hardest steel tools could not break it was discovered. People hoped it will be the ideal construction material beyond their dreams. But only after researchers used Beryl’s universal fluid to construct a machine capable of grind the mineral. Prophets predicted an eternal life of buildings constructed from this material. However, they asked: “What about the soul of such a construction?” And thus ashes of the dead became part of faith. The essence of construction. Builders mixed the fine mineral dust with the ashes of the deceased and molded them in the high temperature of local factories into simple brick form.

During their life some people already knew that they want to be a part of a Border wall or a particular family house after their death. These bricks now represent the current layer of the Border wall and form of the city. Some families keep their bricks together. They believe that in each brick remains a fragment of the soul and memory of their ancestors who then became a component of a spirit of the city. Others believe that these walls can protect the city from dreaded Transparent land. The presence of ash in bricks or metal alloys became a promise to everyone who passed away. Bricks of important citizens have been used for the building of towers and chimneys so that their souls can watch over the city from a height. Because D. W. Targezbung proved many things with his inventions, citizens of the city wanted to place his brick appropriately. However, nobody was able to discover, whether this brick was ever made…

For Paperash, Dominik, Vojtěch a Zdeněk